What's shaking? After the first real weekend of the summer, we're on Cloud Nine. Frankly, we almost feel spoiled with what's happened in strength and muscle lately.

With a victory in August's CrossFit Games, CrossFit competitor Tia-Clair Toomey will become the winningest Individual athlete in the contest's history. She recently shared an inside look into the hard work befitting a living legend.

As the reigning 212 Pound Mr. Olympia Bodybuilding Champion, bodybuilder Derek Lunsford knows a thing or two about training for hypertrophy. His latest musings center around knowing your limits and taking a step back in the gym when you have to.

Want an impeccably strong core? Make a pact to perfect the Pallof press. (Then, say that five times fast.) 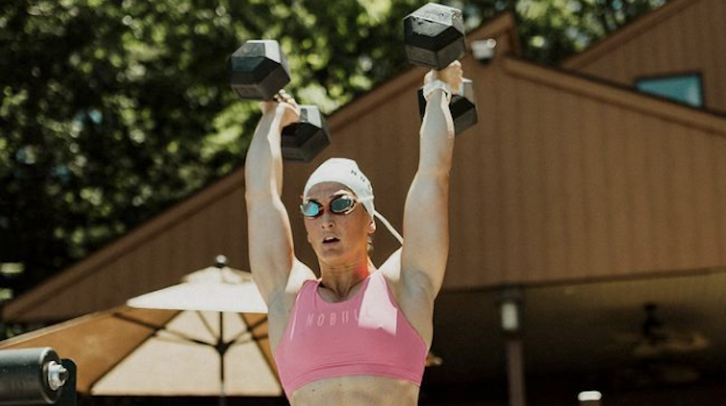 In the competition's history, only two CrossFitters have ever won the Individual CrossFit Games five times — Mat Fraser (2016-2020) and Tia-Clair Toomey (2017-2021). With Fraser since retired, Toomey has a golden opportunity to set a new mark.

On August 3-7, 2022, in Madison, Wisconsin, the five-time Fittest Woman on Earth® in Toomey can become the first person to win the CrossFit Games six times.

Now, you might be asking yourself a vital question. How has Toomey arrived at the brink of such remarkable history? It's simple: She pushes herself to the absolute limit every time she trains. In a video shared on her YouTube channel on June 21, 2022, Toomey revealed that she burns nearly 1,500 calories from training itself every day she works out.

Read about a typical training day in the life of one of the best CrossFit athletes of all time.

Derek Lunsford: "You Have To Respect The Weight" In The Gym

Picture this. You just finished an exhausting day at work but still want to work on your critical gains. That evening, at the gym, you have a heavy barbell in your hands, and something odd happens: You realize you've got nothing left in the tank. Sorry, we hate to open old wounds.

Defending 212 Olympia Champion Derek Lunsford recently found himself in this relatable situation. While working out his back and legs in a training session recently posted to his YouTube channel, Lunsford started to feel fatigued. Rather than press on and finish his entire scheduled program of lifts, the bodybuilder cut the session short.

But why? He knew his limits, asserting that pushing further wasn't worth the risk.

Here's more on Lunsford's executive decision to play the long game with his workouts.

How the Pallof Press Can Unlock Core Strength

At this point in your quest to attain your strongest-ever core, you're undoubtedly familiar with some of the classics. Planks. Sit-ups. Maybe even leg lifts. You know, the works. But you might not have heard of the Pallof press. That's where we come in.

A functional resistance band exercise, the Pallof press will train your ability to keep a tight, stable core while under duress. That means that in addition to chiseling up your abs, it should help you see dramatic improvements with compound movements like the squat and deadlift.

And the best part? All you really need is a resistance band, an anchor point to tie it to, and a little motivation.

Check out our detailed guide on everything you should know about the Pallof press.